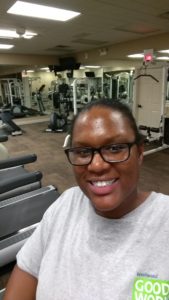 Hey guys. I  know it has been awhile since my last post, so I know you all are wondering what has been going with me and my training for my upcoming 5k. And I must say that my training this time around has been a little challenging. END_OF_DOCUMENT_TOKEN_TO_BE_REPLACED

I have been on my weight lost journey for little over 1 year now, and I must say there have been a lot of ups and downs, and some eye opening moments. And all of the ups and downs and eye opening moments have helped me to begin to understand and love my body. So, of course I have to share some of the frustrations that I have encountered while on this journey, because I don’t want people to believe that it is an easy journey I want to be real with everyone that reads my blog.


Soooooo, I will start from day 1; the day I made the decision to walk into Weight Watchers and start the journey. I was so depressed and I knew I needed to change my lifestyle but all I heard (in my mind) was that it was not going to work and this would be a waste of my money. But I walked into the meeting and began my journey. A month into the journey the weight was just coming off with little activity, I was just doing what I was told to do. But as the days turned into months it began to get harder for the weight to come off, and I could not figure out why. I start working out more, but I also began to go over on my allotted points and guess what, the weight began to come back. So, I began to get mad at myself (because I was over eating) and I was mad at the program because I did not think it was working. But I continue to go to the meetings and track what I was eating. While I was tracking I began to notice that I was a late night snacker and that I had to get that under control if I was going to continue to lose weight. I cut  out certain foods and I worked out 6 days a week, and still  I was gaining weight. As the weight continue to come back, in spite of what I was doing, I began to get more frustrated. But I continued to go to the meetings and track what I was eating, in spite of my frustrations. And then one day I woke up (mentally) and made the decision to stop snacking at night. Once I made that decision I began to see it on the scale, but I don’t get too excited because I have learned that I need to stay focus on the overall goal and not just the short term goal that was accomplished. Now some of you may say that I should celebrate, but the reason why I don’t do it too big when a short term goal is met is because I go over board with it and then the achieved goal is null and void because I gained the weight back. Let me try to explain what I mean about me going over board.

I have learned, while on this journey, that I really can’t just eat whatever I want when I want because I will gain weight. Which is so frustrating because I want to be able to eat a cheese burger and ice cream (regular ice cream) and not gain weight. But during this journey when I have met a goal weight that I set for myself I would get soooo happy and tell myself that it is okay to have the ice cream and cookies (but I would have 2 bowels instead of 1 bowel) and then I would get weighted in at Weight Watchers and I would up a 1 lb or 3 lbs, and shame, angry, and frustration would come-then negative mind talk would happen-then the cycle would continue. See-overboard….

Losing weight can be sooooo frustrating because there are ups and downs, and at times there can be more downs then ups but you have to make up in your mind to continue to make the right choices (working out, being active, and making health food choices) and the weight will come off. But during the tough times( the downs) you have to be able to motive yourself, so I would suggest finding some positive quotes and putting them up where you will be sure the see them, and look at them daily. My faith in God kept me moving forward (staying active, working out 6 days a week, being mindful of what I eat) during the time when the weight was coming back. I am not out of the woods yet, but I have gain more clarity on why I ended up over weight in the first place and I am willing to work through them to reach my weight lost goal. Until next time…..